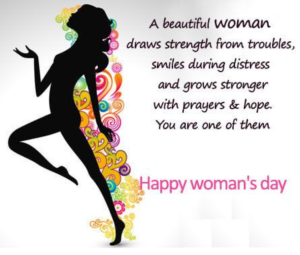 March 8th is International Women’s Day every year to mark the success of women in the struggle for equality.

Congratulations to all women in the world, especially women in Iran.

Although half of the population in the world are women and are the source of harmony, love and tenderness, they have been exploited, oppressed, discriminated and denied emancipation by men for many thousands of years.

The monotheistic religions created by men are clearly the main supporting force in this relationship.

For example Islam: In the Surah Al-Baqarah of the Koran, the rights of women are explicitly defined as half of men.

In Sureh An-Nisa; is the right for men to be able to marry several women, approved far from all ethics and morals. In addition, the exercise of violence and chastisement (“beating”) of women is prescribed.

Many who call themselves religious scholars and intellectuals have tried to find other meanings for the verb “to beat” to no avail. When asked why the women need to be beaten, they have no answer.

It should be considered: Isn’t the existence of such verses in the Koran a sign of the inferiority and absurdity of this book and the laws derived from it? It is unbelievable that “beating women” is a command from God.

In most Islamic countries, regardless of the universal declaration of human rights, the anti-feminist laws of the Koran are strictly enforced. In some countries women do not even have their own ID and are considered the man’s property.

Medieval Europe for hundreds of years violated women’s rights and their personalities in various ways under various pretexts of religion. Catholic priests accused cultivated women of overpowering powers (witches) who resulted in an inquisition trial supported by torture and witch burning.

Finally, the Reformation of religion and its laws, self-confident, wise thinking led to enlightenment and a restless striving for secular democracy, which freed Europeans, especially women, from the Middle Ages and religious rule. The enlightenment and the separation of the absolute laws of religion from social and governmental matters gradually led to a balance in civil society and the emancipation of women, which led to the inhibition of gender discrimination.

The event of Women’s Day was more than a hundred years ago. It all started with a woman! Around 110 years ago, Clara Sofina Zetkin and other brave women’s rights activists founded “International Women’s Day” as a day of women’s struggle and action for the right to vote and equal rights.

This day commemorates the German socialist who, at the second international conference of socialist women on August 27, 1910, proposed that one day of the year should be designated International Women’s Day, based on the idea of ​​women in the United States.

She and her colleagues celebrated the first Women’s Day on March 19, 1911, contrary to the point of view of their male colleagues in the Socialist Party in Germany, Denmark, Austria, Hungary and Switzerland. Women’s organizations have declared March 8th as International Women’s Day since 1921 and this day is celebrated as equal rights for women.

The times of socialism are over, but March 8th as “Women’s Day” has remained. However, in the former socialist countries there is hardly anything left of the struggle of women for emancipation and equality.

In Iran, the issue of discrimination against women and religious misogyny is central to the issue of freedom and democracy.

The women’s movement and the struggle for emancipation in Iran began 150 years ago and intensified with the constitutional revolution.

But because the Shiite backward scholars repeatedly opposed the setting of the discriminatory laws in the matter of women, the emancipation was not realized. Even so, the mullahs hypocritically tried to boast of the high status of women in Islam. But nonetheless, they viewed Islamic women as the property of men. Also as described in the Koran, women’s rights have always been confirmed as half of men’s rights.

Reza Shah Pahlavi supported Iranian women on December 17, 1914 at the request of many Iranian women who wanted to free themselves from hijab, slavery and bondage, he had the hijab prohibited by law. On that day, Iranian girls and women achieved part of the freedoms they were entitled to. They were given new social and cultural freedoms in the area of ​​social affairs by freeing themselves from the yoke and shackles of religious.

During the celebration of the liberation of Iranian women and girls from hijab, Reza Shah gave a speech about the benefits of eliminating hijab from women, equating their social status and changing their rights in a positive way: at this celebration the Shah encouraged the girls and women to seriously oppose the hijab and not use it despite the pressure from men. He said half of Iran’s population lived behind the scenes and in hiding, thereby depriving them of civil status as human beings. A woman’s dignity and decency does not depend on hijab and chador, as the mullahs spread it. A woman must be spiritually and morally noble and strong.

He added, “Iranian women should view this day, which is the day of their gain and success, as a great day and seize the opportunity for the full development and growth of their country.” You, my sisters and daughters, have taken this step for the good of yourself and your country, and legally you are equal to the men of society. By now you should know that your work and dedication are for the pride of your country and that the future happiness and success of Iran are in your hands.

Reza Shah the Great had recognized; If women and mothers actually remain half of the Iranian people on the fringes of society in slavery and captivity, the upbringing of Iranian children and adolescents will not achieve the desired result and development and construction, innovation and social advancement will not be possible. In fact, this realization, one of the aspirations of the constitutional movement building to liberate Iranian women from the bondage of medieval relationships after years of struggle and victory and achieve national innovation and development, has completely changed the political and social structure of Iranian society and paved the way for which paved the important changes for Iranian women and mothers.

Nearly sixty years ago, Iran’s electoral law was changed by the order of Mohammad Reza Shah Pahlavi, and one of the most important parts of it was the equal participation of women in elections. For the first time, women and men alike could play an important role in determining their own destiny and in gaining the right to vote. The Family Protection Act was then passed in April 1963. The law abolished unilateral divorce, prohibited polygamy, and gave women the right to get divorced. Child custody was also entrusted to the mother after the divorce or the death of the father.

Forty-two years ago, the mullah Khomeini, a vengeful reactionary, enforced his ideas in the name of God based on the rules of the Koran, which were based on the common laws of the desert and the nomadic people of the Arabian Peninsula, which were not up to date even 1,400 years ago. With the right to vote and suffrage of women, he let the exception prevail. It was in his interest to be able to keep the voices of women for himself.

It is to be hoped that after the overthrow of the Islamic Republic in Iran, a people’s parliamentary government without the interference of religion and any discrimination, especially the equality of values ​​and rights of women and men, in accordance with the Universal Declaration of Human Rights and international conventions, will be in force , brings freedom, security, equality and economic well-being to the Iranian people.