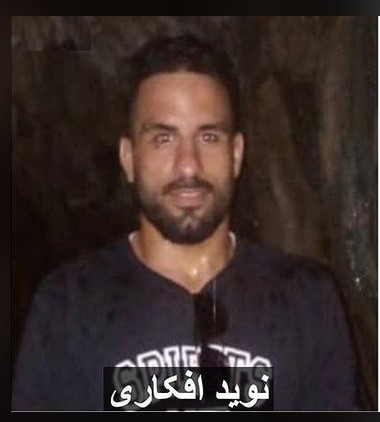 Why Navid Afkari Sangari was executed

Navid Afkari Sangari, a 27-year-old liberal, courageous athlete and Iranian youth champion who took part in the protests against the crimes of Velayat-e Faqih and the regime of the Islamic Republic of Iran in August 2016, was arrested with his brothers in Shiraz. After he was brutally tortured and beaten, he made a forced confession. He was sentenced to twice the death penalty, 74 lashes and six and a half years in prison. The regime ignored the protests of the national and international demands and very hastily executed Navid on Saturday morning, September 12th, 2020, in Adelabad prison in Shiraz, without allowing the last farewell meeting with his mother. He was brutally beaten and hanged twice. He was first hanged until he passed out, resuscitated, and strangled until he died. In doing so, the Islamic judiciary has flaunted its unprecedented criminal techniques. Vahid and Habib Afkari-Sangari, two brothers of Navid, are still imprisoned and tortured in the appalling Adelabad prison in Shiraz. Vahid Afkar, 35, was sentenced to 74 lashes and 54 years in prison, while Habib Afkari, 29, was sentenced to 74 lashes and 27 years in prison. The fourth defendant in this case is Saeed Dashtaki: he is 22 years old and was sentenced to 74 lashes and 17 years in prison. The ruthless killers did not hand the body of Navid Afkari over to his family. With threats against the family, they plan to bury his body in an unknown location. The execution of Navid Afkari was not the execution of a court sentence but a heinous crime aimed at making an example against protesters. The disregard for national and international public opinion in favor of stopping the execution was ignored by the decree of Ali Khamenei and his executioner Ibrahim Raisi.

The criminal regime fears its increasing corruption, treacherously disloyal treaties with Russia, China and the incompetence of their governments, millions of angry and protesting people ready to occupy the streets of the sites of their centers of power. The regime and its criminal supporters fear that they will be overthrown. Through terror and intimidation of the citizens they exert a security policy punishment. They kill critics and demonstrators in the street, or arrest and torture citizens to confess untruths that are needed to get a death sentence. This is the regime’s strength in preventing citizens from insurrection.

The criminal regime acts like an occupying power in Iran and its insidious leadership has proven that nothing is changed in its behaviour and handling. As long as this regime rules Iran, their criminal and terrorist method will continue. It is up to us to overthrow this corrupt, terrorist and criminal regime with determination and the last necessary blow. In this way we will be able to build a secular and democratic state in our country in freedom and peace. We Iranians need a concerted, united and decisive movement to regain our lost security, recognition, value and our prosperity.

The cohesion of a stable nation is stronger than any show of strength.